Checking in with Dr. Christopher Couture at the Winter Games! 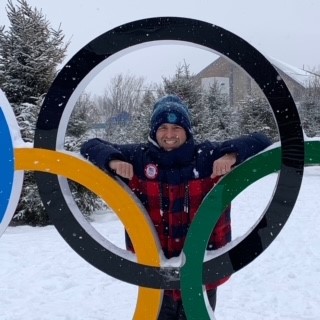 If you looked closely enough during the broadcasting of the Winter Olympics, you may have seen Wentworth-Douglass sports medicine physician, Dr. Christopher Couture on the sidelines.

He has been in Zhangjiakou, China for the second half of the Winter Olympics. WMUR got to catch up with him via Zoom this week to get an update on his experience.

“It’s tremendous. This is my first Olympics and it’s everything I thought it would be and hoped it would be,” Couture said from his hotel room in China. It was midnight local time for him after another day of working as the head physician for Team USA Nordic Combined.

“I’m their primary care physician for them here. Being up close and personal with the athletes as they’re going through this is amazing,” he said. “They are tremendous athletes, able to throw themselves 120 meters off a ski jump and then two hours later, banging out a 10K race at world class speeds. They combine strength, flexibility, endurance, cardiac output, and guts for what it takes to go off those large jump towers. I’m in awe of it. It’s one thing to see it on TV, but when you see it up close and you appreciate the scale of what it means to fly longer than the length of a football field, it really is tremendous.” 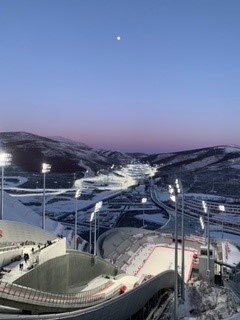 While Couture is there to take care of the athletes medically, he hopes they don’t need his services.

“The first thing I would say is, hopefully I don’t see them as a physician. Often what I’m doing is going from the top to the bottom of the course and helping them with their gear. When they’re jumping, I’m at the exit and I’m watching them jump towards me and if something unfortunate were to happen, I would be there. I’m at the start/finish line of the cross-country races acting as a support person,” Couture said.

Couture, who also works as the head team physician for the University of New Hampshire Wildcats, says COVID-19 has been an ever-looming presence over the game in some ways.

“We’re testing every single day while we’re here. What you’re hearing about is the “closed loop” and it really is a closed loop, so we cannot go outside a defined perimeter. That perimeter has buses and trains that we can go on to get from venue to venue, but we’re not out on the town going to restaurants and so forth…we’re wearing masks all the time and a lot of the staff that are around are in hazmat suits. You go in the dining hall and the people who are waiting on you are all in full biohazard suits. It’s surreal. I haven’t gone out and seen the great wall, and I’m not going to be walking the streets of Beijing, so there’s not that experience,” Couture said.

“The athletic experience is what I imagined it’s supposed to be. You’re at these incredible venues watching the best athletes in the world get what could be their one shot on the world stage. I’m in awe of what they do.”

Learn how the Women's Sports Medicine Program at Wentworth Douglass Hospital gave one athlete the specialty care she needed for ...

Want to learn more about acupuncture benefits? Join Wentworth-Douglass Hospital's Integrative Therapies team as we explore the a...