Durham Firefighter Back on the Job After Career-Threatening Injury

When Durham Firefighter David Blatchford slipped on ice while on duty last December, he considered it ‘a stupid little fall’ and tried to push through.

Blatchford, 58, didn’t realize at the time that he had sustained rotator cuff tears in both shoulders and his injuries had the potential to be career threatening.

What followed was an intense treatment and recovery effort with Wentworth-Douglass Hospital physical therapists, where Blatchford’s work ethic and love for his job helped to carry him to a “remarkable” recovery.

Blatchford suffered his injuries on Dec. 26, 2021. He had covered a Christmas Day shift for a coworker and went outside the following morning to clear snow off vehicles when he hit an icy patch and fell hard to the ground.

“I flipped on the ice and my feet came over my head, and I landed on my right side. I literally felt like I got put in a vice, just in my shoulders,” Blatchford said. “I had pain from both elbows to my shoulders. I had no back or neck pain.”

Blatchford reported the on-duty injury and attempted to return to work, but knew he was in trouble when he couldn’t release the airbrake on the fire truck with his hands. Blatchford spent three days at home trying to recover with rest and aspirin, but the pain was relentless, and he had to seek medical attention.

Diagnosing Blatchford’s injuries at Urgent Care was initially a challenge because he wasn’t experiencing any back or neck pain. Physicians ultimately referred him to Seacoast Orthopedics & Sports Medicine in Somersworth.

At Seacoast Orthopedics & Sports Medicine, Kelly Mohn, PA-C, conducted an MRI on both of Blatchford’s shoulders and diagnosed him with a SLAP tear and rotator cuff tear in the right shoulder, and a rotator cuff and bicep tear in the left shoulder. He was immediately scheduled for surgery with Dr. Gavin Webb.

“When she told me about my injuries, I was floored,” Blatchford said. “I knew after the fall that I was hurt because I didn’t bounce right back up like I usually do, but I just figured that I would tough it out.”

Webb said rotator cuff tears can be a frequent injury associated with winter falls and there are times where people don’t initially realize how serious their injuries are.

“Unfortunately, a slip and fall on snow and ice is a common occurrence during a long New England winter. It is also a common cause of rotator cuff tears,” Webb said. “The initial evaluation in the ER or Urgent Care is often negative for a fracture, but if the pain is not improving and you are having difficulty lifting your arm away from your body, it’s important to be evaluated by an orthopedic specialist to determine if there is a rotator cuff tear, as often times this requires a surgical repair.”

Blatchford’s road to recovery was anything but smooth. He had surgery on his right shoulder in January and surgery on his left shoulder in April. While going through physical therapy at Seacoast Orthopedics & Sports Medicine for his shoulders, Blatchford also had surgery and physical therapy elsewhere for a meniscus tear in his right knee that he sustained while on an exercise bike at the gym.

Despite the obstacles, Blatchford was determined to get back to work by October. As a motorcycle enthusiast, the thought of riding his motorcycle again served as additional motivation.

Blatchford’s therapy included core exercises and triceps and bicep work. His rehab sessions would end each day with him using a cargo rope to drag a sled carrying 195 pounds in weight across the room four times. This exercise was meant to simulate the dragging and carrying movements associated with the job of firefighting.

“It has been a real uphill battle. I never thought I was doing anything extra but I was just determined to get back to work,” Blatchford said. “The people at PT in Somersworth were fantastic and I can’t say enough about Dr. Webb. He’s very understanding and he sits and takes the time to talk to you and I really appreciated that, and so did Kelly (Mohn).”

Webb cleared Blatchford to return to work on October 3 and he did so on October 6.

“A rotator cuff tear is a significant injury which usually requires surgery to repair it. The recovery is often long and challenging and requires several months of physical therapy. The skill and experience of the physical therapist is very important in the overall return to normal function,” Webb said. “To recover from one side and then start over and have the other side repaired and complete the recovery all over again takes a lot of strong will and determination. To be able to return to full duty work as a firefighter eight months after bilateral rotator cuff repairs is truly remarkable and is a credit to his dedication to serve as a first responder.”

Since returning to work, Blatchford says he’s been putting greater effort into working smarter and using better body mechanics. He added that being stuck at home in pain gave him a new appreciation for his job and drove home the point that he’s not yet ready to hang up his firefighter gear for good.

“It was a really bad injury, but it kind of rejuvenated my career, because I’m looking at things a lot different now. People say things happen for a reason and I think I’m in a better place at work now because of everything that happened,” Blatchford said. “The first time I hung my gear back on the truck it was kind of emotional for me because I knew what I had to do to get back to that.” 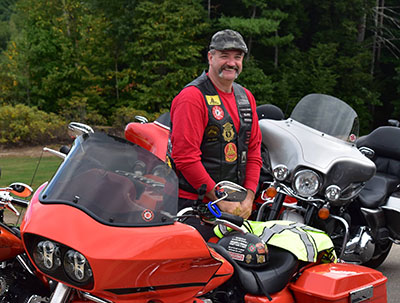 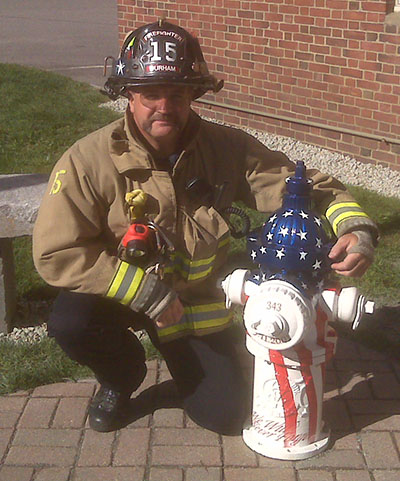