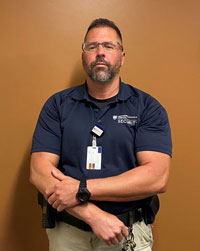 It took only two minutes for Wentworth-Douglass Hospital Security Officer Dan Dore to help a distressed man in the hospital’s parking lot on the morning of June 8, but had it been a minute longer it could’ve been too late.

Dore’s effort is now being called “heroic” by hospital staff and his supervisor.

“I was made aware of it by the ED nurses and they told me it was a heroic effort because the person was in medical distress and Dan recognized that and not only got him inside the hospital but whisked right into the ED and went above and beyond by going and getting a nurse to come out as opposed to the standard triage process because he was in such medical distress,” said Terrance O’Hara, the hospital’s manager of security. “They relayed it as a heroic effort that potentially saved this individual’s life because he was on the verge of coding, as they put it.”

Dore said that he knew time was of the essence when he was walking back to the Emergency Department parking lot and spotted a vehicle parked crookedly in the ambulance bay. A pale man emerged from the vehicle, stumbled, and was struggling with every breath.

“I did what anyone else would do, I went in and I got him a wheelchair. I didn’t want him to fall over,” Dore said. “It’s just a matter of luck and timing.”

Dore then rushed the man passed COVID screening, but did grab two masks, and the ED registration process. While both processes are important to keeping patients safe and prioritizing needs, Dore said he knew from experience that the man’s condition was worsening and delaying care would be risky.

Dore was able to flag down Registered Nurse Mark Ford, who looked at the man and immediately took him in for care.

Shortly thereafter, Ford made it a point to tell Dore’s supervisors that he most likely saved the man’s life, as the man was very close to going into cardiac arrest.

Despite the recognition, Dore is adamant that he was just doing his job.

“It’s a natural instinct, everyone is saying ‘heroic’ but it doesn’t seem heroic in any shape or form for me,” Dore said. “To me it’s just regular due-diligence.”

As an 11-year veteran of the hospital’s security team, Dore says security and hospital staff often work together to help patients and he has helped many patients in distress.

“Our job is situational awareness, so you don’t walk around with blinders on,” Dore said.  “The most activity is in the Emergency Department, so there’s a lot of being in the right place at the right time.”

Dore currently works as one of the offsite officers that patrols multiple hospital locations and properties. Dore likes working at Wentworth-Douglass because of the people and strong collaboration between hospital staff and the security team. Prior to his time at Wentworth-Douglass, Dore worked as a correctional officer for Strafford County.

O’Hara said Dore’s effort is worthy of recognition and called it a great example of the strong partnership between the hospital and the security team.

“I would echo their thoughts as far as heroic,” O’Hara said. “Once I got all the facts, put everything together and watched the video, it’s incredible that Dan acted in the way he did.”

Hands of Healing: Wentworth-Douglass Hospital Nurses Take Part In The 'Blessing Of The Hands'

The hands of nurses are capable of some amazing things, so it was very fitting that those hands were in the spotlight recently.

Emergency Medicine: Meeting the Challenges of the Pandemic

Learn about how Wentworth-Douglass Hospital's emergency medicine team stepped up to the challenge to save lives during the COVID...

Wentworth-Douglass is Always Here for the Care You Need

Wentworth-Douglass Hospital is here for you to deliver the care you need every day -- even during a pandemic!