Crystal Brackett could no longer ignore her calling.

She had an interest in nursing, but never pursued it as a career. She thought it would just be too difficult.

Instead, Brackett built a successful career in human resources and had a family. But she could never shake the thought of what it would be like to be a nurse.

And then COVID-19 happened.

“When COVID-19 hit, it was kind of like ‘OK this is how you become part of something bigger, this is how you help people,’ and I was really inspired by all the other nurses that were working on the front lines,” Brackett said. “As scary as it was to start nursing school in a pandemic, I knew it was the right choice.”

Brackett is one of a record number of graduate nurses that started in the Wentworth-Douglass Nurse Residency Program this summer. This is where nurses that completed their academic studies began to complete the requirements to become a registered nurse.

The size of this summer’s class is a direct result of Wentworth-Douglass’ reputation of success and positive work environment, according to Julie Cole, RN, clinical educator for Nursing Education Research and Innovation.

“That increase in interest is due to the reputation of the hospital in the community, the Magnet designation status, and feedback from school of nursing alumni,” Cole said.

Wentworth-Douglass formalized its Nurse Residency Program in 2015 to better meet the learning needs of the new graduates, and to provide them an extra layer of support to ease them into the first year on the job.

The program is a yearlong orientation where the nurses attend classes, work collaboratively with nurse educators, and develop personalized orientation plans.

“The first year of nursing in really important because with the transition from graduate nurse to licensed nurse it’s really essential that you get the support because you’re taking on a lot of responsibility that you never had before,” Cole said. “The premise of the program is to make sure that the new grads feel supported in their transition to practice and that they can do a normal acuity assignment and become assimilated to the nursing team at Wentworth-Douglass”

Cole said the residency program not only helps properly develop the nurses, but it has helped the hospital retain nurses by offering additional education and training to support the professional development of the nursing staff.

Cole said the hospital also supports multiple pathways to becoming a nurse including through associate, bachelor, and direct entry master’s degree programs. The hospital also offers tuition assistance and flexible scheduling for those going through school.

Here are a couple of the hospital’s newest nurses: 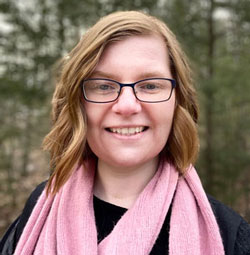 Brackett started her journey in nursing by earning a medical assistant degree from Southern Maine Community College in Portland, Maine. She completed her clinical practicum at MaineHealth Cancer Care and had a co-worker recommend Wentworth-Douglass.

Brackett started working per diem at Wentworth-Douglass as a medical assistant in oncology. She was recently hired as an infusion nurse in the Seacoast Cancer Center and will complete her bachelor’s degree in the fall.

Brackett has drawn inspiration from working in infusion at the hospital’s cancer center, because every day presents an opportunity to make a positive impact on a patient going through a difficult time.

Brackett hopes to settle into her role at the cancer center while working towards a master’s degree. She ultimately hopes to stay and grow her career at Wentworth-Douglass.

“I knew from the beginning that Wentworth-Douglass is where I wanted to work,” she said. “I like the way the hospital takes care of its employees and how valuable they consider the nursing profession.”

Brackett says she has strong support system in place with her husband and two children, and an opportunity to set a good example for her family.

“I think what I’ve done will at least show them that if you have a dream, you should go after it and let nothing hold you back,” she said. “It no longer feels like ‘if I can do it,’ instead it’s ‘what do I want to do next.’” 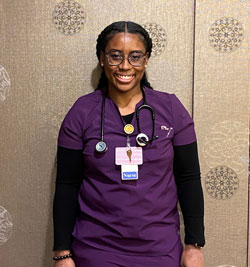 Arielle Camillo always had an interest in healthcare, but with a degree in biochemistry from the University of New Hampshire, Camillo initially had her eye on lab work.

But two major family events, the loss of her father and her mother undergoing heart surgery, kept the idea of working in health care fresh in her mind.

“My mother had a lot of complications, that was when I was ‘this is it,’” Camillo said. “I was taking care of her at home. I was a nurse without being a nurse.”

Camillo knew the road ahead would be a challenge with additional schooling, but she felt the best way to move forward was to find a hospital job and gain valuable experience working with patients.

That decision brought Camillo to Wentworth-Douglass, where she took a job as a patient transporter, helping to move patients from one area of the hospital to another.

“I knew I needed to work in the hospital if I want to be a nurse,” Camillo said. “I just needed to get my foot in the door and it helped a lot. I feel like it made me who I am today because of the experience I got transporting.”

Working as a transporter gave Camillo the flexibility she needed to work while earning her associate’s degree from Great Bay Community College.

Camillo feels that her experience as a transporter was invaluable, allowing her to learn the landscape of the hospital and witness future nursing colleagues in action. Still, she admits the transition is a major adjustment.

“When you talk to patients in transport, it’s for a few seconds. Now as a nurse, you’re with a patient all-day sometimes, which is great because you get to know them. You know their medications, their schedules, and it’s great to see that side of things,” Camillo said.

Camillo is stationed on 3 South, which is made up of long-term patients, bariatric patients coming out of surgery, med-surge patients, wound care, and patients suffering from conditions like kidney stones and urinary tract infections.

Camillo said 3 South is a great place to work as a nurse, because the variety of cases makes her feel well-rounded. She is also grateful for the extra support provided by the Nurse Residency Program.

“Because I’m a new grad, I like that I’m not fed to the wolves,” Camillo said. “I want to make sure that I’m not making any mistakes. I don’t want to go into nursing thinking that I know everything and it’s good to have that type of program there just to kind of ease your way into it.”

Camillo plans on furthering her education and becoming a nurse practitioner. She has an interest in working in labor and delivery, but is keeping her options open.

What’s Next for The New Nurses

In early July, Brackett, Camillo, and the other graduate nurses spent one week in classes focusing largely on psychomotor skills, inserting an intravenous line, learning how to program IV pumps physical assessment skills, infection prevention, safe medication administration, and critical thinking, among others.

At the conclusion of the classes, the nurses returned to the units they were hired in and are working closely with an experienced registered nurse until their individual competencies and skills checklists are completed. They will then be able to handle a full patient assignment.

The nursing residents are still required to attend monthly classes, which is a good opportunity to discuss how their transitions are going and address any concerns in a low-stress environment, according to Cole.

She says Wentworth-Douglass uses a homegrown curriculum to put together its courses for the residency program, because it gives the hospital flexibility based on potential education gaps or hospital needs. For example, a course on donning and doffing personal protective equipment was added during the COVID-19 pandemic.

While Cole is pleased with the increased interest in the program, she said it will need to grow to meet the hospital’s needs.

“I’m glad so many people are going into nursing. It makes me feel encouraged about the future,” she said.  “But as the hospital continues to grow with additional services to meet the needs of the community, and as many of our nursing colleagues retire, the need for nurses is pressing. The Nurse Residency Program at WDH really helps to successfully onboard newly licensed nurses to the hospital environment.”

Camillo said she would urge anyone on the fence about a career in nursing to just go for it.

“How bad do you want it? How bad do you want this career? I think it comes down to that,” Camillo said.  “I think there are people that want to do this job and Wentworth-Douglass is a great choice because they’ll have that support to get them through.”

The Nurse Residency Program hosts three groups a year, typically in February, July, and September. The hospital is hoping to get program formally accredited in the next two years.

Check out the hospital’s careers page for nursing opportunities.