Dr. Roger Evans came to New England in 1978 to join a private urology practice in what he considered a small town - Dover.

And across six decades, he never left.

At the time, Evans didn’t know that he would end up spending his entire career on the Wentworth-Douglass Hospital medical staff, playing a key role in significant changes at a growing hospital in a bustling Seacoast region.

Evans retired as Wentworth-Douglass Hospital’s chair of surgery on June 30 after 44 years of serving patients on the Seacoast. 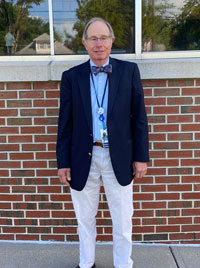 “It just happened,” he said. “We moved here with two kids under 2, and had another one two years later, I don’t think I looked up for 20 years, I was so busy.”

By the time Evans did look up, he had become one of the most important and influential physicians in the 116-year history of Wentworth-Douglass .

Evans treated multiple generations of countless families across the Seacoast. And while his professionalism was always a constant, his trademark bow ties brought a welcome  daily change.

“Always a gentleman, Dr. Evans is a role model of respectful professional collaboration among and between clinical and non-clinical members of our team and is always available wherever and whenever needed,” said Wentworth-Douglass President & CEO Jeff Hughes. “His character is exemplary. He is always fair, has a great sense of humor, is a good listener, and humble. At his core, he is consistently a champion and voice of the patient and an advocate for ‘doing things right and always doing the right thing.’ He is truly a ‘surgeon's’ surgeon.”

Hughes said Evans was an aggressive advocate for the growth of surgical services, most notably thoracic, bariatric, vascular, gynecology oncology, and robotic surgeries. He was a founding member of the Surgical Steering Committee, the Surgical Executive Operations Committee, and was the leader of surgical services during COVID-19 and through challenges in sterile processing.

Evans said that while he hopes he contributed to some of the hospital’s advancements, he believes the hospital was always a step ahead.

Outside of advancements in medicine and technology, the biggest change Evans has observed is the community. He said Wentworth-Douglass has gone from a small community hospital to an acute care hospital taking care of a larger, and sicker, population.

Care has become a lot more specialized and technical and the hospital growth is in response to all these changes, he added.

“We’ve become bigger, busier, we’ve expanded, all this stuff is pretty general to medicine,” he said.

The changing nature of the industry makes continuing education, and awareness of trends, essential for medical personnel and administrators, and Evans believes that Wentworth-Douglass has always been proactive in those areas.

“While eventually all hospitals come around to this, if you’re on the forefront with that, it’s really helpful and I think it continued to attract that type of medical staff that is interested in being on the cutting edge of medical care, not only for surgery, but for medicine in all of these things.”

Evans is originally from New York City and came to New England after serving in the U.S. Air Force and completing his medical residency in Virginia. After joining a colleague at a private urology practice, he became a member of the hospital’s medical staff on July 15, 1978.

In 2007, Evans became an employee of Wentworth Health Partners working in Manchester Urology at Dover.

During his time at the hospital, Evans served on, and led, many medical, clinical, and leadership committees. He served as president of the Medical Staff from 1991-1994 and represented the hospital as an officer in the New Hampshire Chapter of American College of Surgeons for four years. He served as chairman for the Department of Surgery from 1985-1987 and again since 2012.

In 1995, Evans was elected to the hospital’s Board of Trustees serving in this capacity until 2004. During his tenure on the board, he served as board secretary from 1995-1998, board chairman from 1998- 2000, and served on nearly every board committee. In 2003, he was selected as the New Hampshire Hospital Association's Outstanding Trustee of the Year.

Evans said the decision to retire wasn’t an easy one.

“I don’t know if there’s ever a right time, but at some point, it becomes time to let someone else take over,” he said. “It’s been a good run.”

Evans is expected to remain involved with the hospital in a limited capacity and is an emeritus trustee on the Board of Trustees.

Evans, who resides in Kittery, Maine, said he will use retirement to spend more time with his wife Sandy and family, which includes three children and three grandchildren.

Evans acknowledged that the hospital is going through another major change now with its deeper integration into the Mass General Brigham system, which he said is another example of a changing industry. In this case, hospitals coming together to expand resources and serve a growing population.

He said he’s confident the hospital can maintain the culture that makes it great.

“The community attitude at Wentworth-Douglass is very palpable,” he said. “People feel like they’re part of the team, and you feel the comradery throughout the organization.”

For Afghan refugee Mohammad Nazir Walizada, a job as a transporter at Wentworth-Douglass Hospital isn’t just the start of a ne...