In this week’s “Employee Spotlight” we’re changing things up a bit in order to tell the amazing story of one of Wentworth-Douglass Hospital’s newest employees. 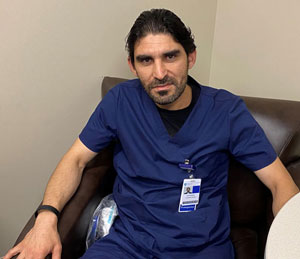 Walizada can’t return to his old life in his native Afghanistan, because his connection to the previous government makes it too dangerous. For 17 years he protected two presidents, Hamid Karzai and Ashraf Ghani, and their families, as a security officer for the Afghanistan Presidential Protection Service.

With the Taliban now in control, Walizada and those loyal to the former government are considered enemies. He lost close friends and colleagues during the 2021 Taliban insurgence, but he and his immediate family were able to escape.

“The Taliban were searching for us, they went to my home and they searched for me,” Walizada said.

When your job is to protect the president and his family at all costs, the danger from the Taliban is something that you learn to live with. Walizada never backed away from that danger.

Walizada said the president’s security detail had multiple gun battles with the Taliban while traveling the country with the president. He said there was even one where his team was engaged in a 12-hour shootout with Taliban fighters.

The constant danger reached a boiling point in August 2021, when the Taliban overthrew the government.

Walizada was evacuated with his wife, five children, and two nephews, but had to leave behind his mother and brother in Afghanistan. Walizada and his family were relocated to New England through the Park Street Church in Boston.

While it was difficult to leave some family behind, Walizada said he’s grateful for the opportunity that America has provided him and his family, which will grow with the impending arrival of his sixth child.

“I’m really happy here in the U.S. because my children can go to school here,” Walizada said. “In Afghanistan, there’s no work, no money, everything is expensive.”

Walizada was referred to Wentworth-Douglass by a fellow employee and church acquaintance. He said his favorite part about being a transporter is the constant interaction with people.

Even though Walizada enjoys his role as a transporter, he does have ambitions of joining the hospital’s security team.

Walizada is working to improve his English, according to Laura Roberts, hospital transport and care van manager.

"Mohammad has been a great addition to our team. He is a hard worker and eager to learn. The team has welcomed him and are embracing the difference in culture,” Roberts said. “Mohammad has improved so much upon his English in such a short time. He continues to impress us each and every day with his continued efforts embrace our language and culture. We look forward to seeing him grow and further develop his skills.”

Dr. Roger Evans came to New England in 1978 to join a private urology practice in what he considered a small town - Dover.